For a first time Walt Disney World visitor, a character dining experience is a must. At our first visit last May, I was pleasantly surprised with the character breakfast offered at 1900 Park Fare. 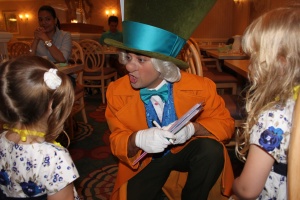 The character breakfast offered by 1900 Park Fare is a unique one, partly due to the character selection offered. Where else can you find Mary Poppins, Alice, the Mad Hatter, Pooh Bear and Tigger?

This nostalgic group really gave me that warm-and-fuzzy feeling of being young again (and at 30-years old, with two young children of my own, it gave me some much needed youthful recharging!).

Of all the character meals that we enjoyed during our trip, this one stood out for the immediate likeability of the characters and setting. Booking a later brunch (10:30 a.m. on a Friday) resulted in unprecedented one-to-one attention.

Alice played a game of hide-and-seek with our two-year-old! 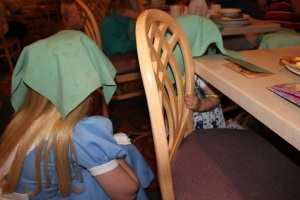 The breakfast buffet itself provided a great variety of traditional breakfast foods (and made-to-order omelets) and some signature items too. The restaurant’s infamous sweet strawberry soup had us all talking–and trying to recreate it at home!

Check out this menu for details on the buffet offering and pricing.

Ultimately, making a later reservation for brunch provided great out-of-pocket value, and got us through a good part of the day touring the parks until dinner.

It was one of the less expensive character dining options, but allowed us to meet five characters that would have otherwise been the subject of long line ups in the parks.

Personally, I prefer character dining to waiting in long lines for character meet and greets. It’s more relaxing, it’s air conditioned, and you are able to have the characters come to you.

What character dining experience is your favorite?